Roboticists Disagree on Whether Robots Will Replace Us All 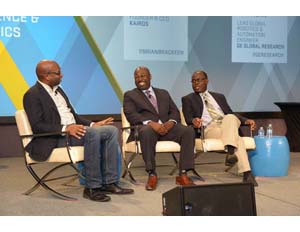 Robots tend to bring out anxiety in humans. “No they will not kill us,” assured Dr. Ashitey Trebi-Ollennu, a NASA roboticist who participated in a discussion on artificial intelligence and robotics.

Whether robots will take our jobs may be another story. They definitely will replace jobs, said Terrence Southern, a robotics engineer at GE who was also on the panel. “That’s what I do. I’m called in to automate a company,” said Southern about his work building robots to replace human labor and automate business tasks. “I’m like the Grim Reaper,” he quipped.

Trebi-Ollennu somewhat disagreed, pointing out that while robots will replace more low-skill labor, their proliferation into society will mean more jobs for people to program, build, and maintain them. The audience was spellbound in what was hands down the most techie of our panels.