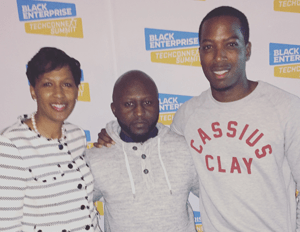 Check the video and the “Major Key” DJ Khaled shout out.

Three weeks ago Tristan Walker shared on Instagram that Walker & Co. Brands received its official U.S. federal trademark registration for BEVEL. This is not a swift process (trust me, I know. Presently, I am registering a few trademarks) to navigate.

Congrats Tristan & Walker & Co. Brands! In the words of Nas please help us all to continue a “… signature fade with the BEVEL blade … that’s a major key.”

Next up … Stewart Butterfield, CEO of Slack.

Entrepreneurs who attended our Silicon Valley-based TechConneXt Summit were treated to a master class from Michael Seibel, a partner at Y Combinator, the seed accelerator that’s propelled scores of startups to stratospheric heights. This world-class innovator offered lessons on tech entrepreneurship the way the late Thelonious Monk played jazz—straight no chaser.

There are a number of reasons why company founders covet Seibel’s advice. For one, he’s applied his technical chops and business prowess to co-found and operate Socialcam, acquired for $60 million in 2012, and Justin.tv/Twitch, purchased for $970 million in 2014. Today, he’s affiliated with YC, which has funded 100 to 120 companies in a range of sectors—from software to aerospace—every six months. Moreover, African American entrepreneurs can fully appreciate Seibel’s approach: “I want every minority founder that goes to YC, to be in the top 20% of the batch. I want every minority founder  to have such a good team, so much growth, such a big market that investors look like idiots if they let race get in the way of making an investment.” At YC, he says roughly 15% of its portfolio companies have either a black or Latino founder—unheard-of within the Silicon Valley venture community.

In his 20-minute talk, he laid out the real deal of scratching, surviving and making it in the Valley: “This place is not about realizing your dreams. This place is about making money.” And although blunt in his delivery, Seibel proved to be refreshing, engaging, and motivational in his candor.

In the following edited excerpts, we reveal seven powerful nuggets he shared at TechConneXt:

I tend to tell people they need to have a year’s worth of cash. When you’re younger, this is a lot easier, this is like a year’s worth of cash to live with two, three, four roommates and eat ramen. You need to be willing to quit your job. One of the things we say all the time is that “If you’re not in 100%, how do you expect us to be?” These prerequisites are really, really, really hard. It’s the pattern that people are looking for. What I would tell you is take all the genius you’re applying to the product and start thinking about how you can get yourself set up in this kind of life.

Discard the myth you’ll gain financing on the strength of your idea:

Ideas change; ideas are a commodity, and the lesson that’s being taught out there in the world is just simply wrong. It’s not you come up with a genius idea and you get the money and then you build something. That’s just a lie. Whom you’re working with is primary. When you think about what you want to work on, I tend to tell people to brainstorm the problems with people who you might want to be your co-founders because when you all get excited, bam, the same people you’re brainstorming with can be the people you can start a company with.

Be passionate about problem solving:

Ideas are solutions. The first solution that can be released won’t be good, and that’s OK. Investors are completely happy with that. If you’re not passionate about the problem that you’re solving, you’re not going to be coming up with the second, third, fourth, fifth idea. You have so many more opportunities to help your customer if they have a problem every day than if they have a problem every other day.

Know the size of your market:

One question every investor wants to know is how big is your market. There’s a very simple answer to why. They don’t make money unless you build a billion-dollar company and it’s hard to build a billion-dollar company in a small market. There’s really two ways of doing this. It’s really easy if you’re building a company in a space that already exists. Let’s say you’re building an online small business bank. All you have to do is look up online how big small business banking is and, bam, you know your market size. If you’re looking up something that never existed before all you have to do is figure out how many potential customers there are, how much you’re going to charge per year and, bam, there’s your market size. This isn’t rocket science but it’s one of those sneaky things that can disqualify you without you really knowing.

Minimal Viable Product. Once you have that team and once you have that product that has a problem you will solve, this is what you get to work on. Let’s be clear, you don’t start with this. You don’t say, “Let me hire someone to build an MVP and prove that there’s something good here, and then hire my team.” There are seven different reasons why that’s a bad idea but the most important one is most investors will not invest. You need their money. Most of them will look at outsource development team and say, “No thank you.” When you think about your minimal viable product, this is the first opportunity you have to get something in customer’s hands and it’s very scary. A lot of people delay this because they think, “If I release something that sucks, I’ll never be able to get my business off the ground.” In fact, some business gurus talk about this. It’s complete bulls**t. Very few of you remember the day that Google launched. Very few of you remember the day that Amazon launched or the day that Facebook launched. Those guys are doing pretty well. Just get anything in your customer’s hands. If you’re solving a video problem that the customers have often, they will use whatever piece of crap you release because it’s better than nothing. Then from that point forward you’ll learn what they like and what they don’t, and you’ll make it better.

Learn the value of launching and leverage: