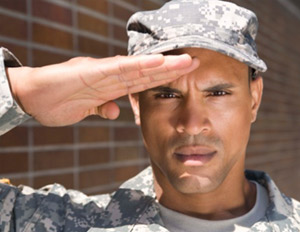 While all veterans of war experiences adjustment issues, most do not develop PTSD. According to Stacey Pollack PhD, the National Director of Program Policy Implementation for Offices of Mental Health Services at the U.S. Department of Veteran Affairs, only 15 percent of soldiers experience develop the disorder. “Most people coming home do not develop PTSD,” she says. “All soldiers are going to be impacted by trauma; how can they not be? If I expose you to enough trauma it’s going to have an impact… The VA has increased mental health services in recent years with regular screenings for PTSD, depression, substance abuse and whether or not someone may have symptoms to traumatic brain injury. Some of the symptoms are adaptive in a combat zone. It becomes traumatic when you can come home.”

Another aspect that’s unique to the wars in Afghanistan and Iraq are the instances of traumatic brain injury. “People are surviving many injuries that do not survive in previous conflict,” says Pollack, who also notes a higher number of women have been impacted. “We need to make sure that there are services geared toward female veterans.”

The tricky aspect of providing mental health services to veterans is outreach, which also is tied to the stigma of seeking treatment by many. Gabe Tolliver enlisted in the military in 2007 and served in Afghanistan in 2009 as a broadcast journalist for the U.S. Army. He documented combat, but also had to rely on his military training in battle. He now makes films and sculptures about his recent service and the traumatic nature of war.

“The war has become like wallpaper to people, it’s a sound bite,” Tolliver says. “The military world and civilian world share commonalities, but they are two separate worlds. Kids who’ve grown up over the past decade at a military base have seen their parents deployed multiple times. They know kids who’s parents have been killed or wounded. There is a disconnect with the military. The culture says, suck it up and man up. It’s the culture within the military that has to change and that’s going to take a while until it’s accepted by everyone that as a soldier, you can feel vulnerable and that’s okay.”

Signs that family members of veteran should encourage their loved one to seek treatment include difficulties sleeping, nightmares, and withdrawal from families and children. Information for family members is readily available at www.ptsd.va.gov. The VA has also developed websites and apps designed to appeal to younger veterans, including MakeTheConnection.net, as well as a 24-hour veterans crises hotline 1-800-273-TALK.