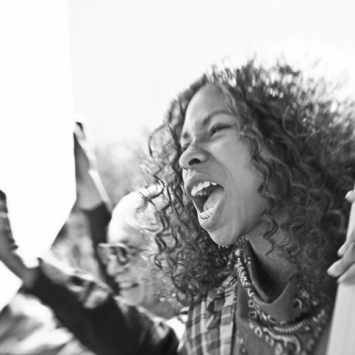 A Day Without A Woman

The world would be a scary place without the work that women contribute. In addition to making up nearly half of the U.S. workforce, women complete an immeasurable amount of unpaid domestic labor as caretakers, while black women make up one of the fastest growing segments of business ownership in the country. Yet, in still, their contributions to society often go unrecognized and underpaid.  On top of that, women are subjected to workplace inequality, sexual harassment, and rollbacks against reproductive rights.

To bring these issues to light, women across the country are refusing to do any work today. Instead, they are participating in A Day Without A Woman, a national campaign aimed to highlight the crucial role women play in the U.S. economy and abroad. It is also a strike to fight back against gender-based inequality, violence, and discrimination.

Organized by the women behind the history-making Women’s March in January, A Day Without A Woman encourages women to stay home from their jobs and take rest from their routine domestic duties, like household chores and caregiving. Those who couldn’t get the day off from work are encouraged to wear red in solidarity and avoid shopping at all companies outside of small, women and minority-owned businesses.

How Can Allies Show Support?

Business owners can support this cause by giving their female employees the day off from work. Meanwhile, husbands and boyfriends can show support by doing chores on behalf of their wives and partners.

The Cost of A Day Without A Woman

Research published by the Center for American Progress shows that the U.S. would not be able to function if all paid female workers simultaneously take one day off from work. If that happened, it would cost the country nearly $21 billion in gross domestic product (GDP.) The study, which is titled A Day in the U.S. Economy Without Women, also found that women’s labor contributes $7.6 trillion to the U.S. each year.

But women’s work expands beyond paid labor. If the GDP were to include all of the unpaid domestic work primarily performed by women, then that number would increase by 26 percent.

“Women have long played a vital role in the economy, but women’s earnings and economic contributions are becoming more and more essential,” said Kate Bahn, an Economist at CAP and co-author of the analysis, in a press release sent to Black Enterprise. “However, due to occupational segregation and the devaluation of jobs that women disproportionately hold, outdated labor standards, and insufficient work-family policies, women in the United States aren’t able to meet their full economic potential.”

In addition to calling for respect for their labor, activists are also using A Day Without A Woman to push lawmakers to pass policies that support women and mothers like paid family and medical leave, paid sick leave, and access to quality, affordable child care.